WELLINGTON, FLORIDA: WHERE THE RICH GO TO PLAY A rider and her horse tackle an obstacle at one of WEF's featured competitions.        Winter Equestrian Festival/Facebook

Every winter, the small town of Wellington, in southeast Florida, experiences a tremendous influx of some of the wealthiest people in the world.

From the Springsteens to the Bloombergs, to the families of Steve Jobs and Bill Gates, to Arab sheikhs and South American billionaires, it's a congregation of people with spectacular quantities of money.

No, they aren't gathering for some sort of business affair. They're coming for WEF: the Winter Equestrian Festival, which takes place every year from January to April on the hallowed grounds of the Palm Beach International Equestrian Center. The 12-week WEF has been the longest equestrian event of its kind for several years running, and it attracts riders at all levels of the sport.

Because of the costly nature of all things equestrian, it's no surprise that rich people and horses go hand in hand. But while some wealthy riders and owners are just in it for the glamour and prestige, some — like Georgina Bloomberg and Jessica Springsteen — are serious and successful competitors.

As WEF has grown over the years, it has turned Wellington into a winter oasis for the upper crust, who come to ride, mingle, and bask in the warm weather. But while the human amenities are nothing to sneeze at, the real luxuries are reserved for the horses. Here's an inside look at this star-studded fantasy world, where celebrities come to play and their four-legged companions reign supreme.

Wellington, Florida, is a community of about 60,000 people in southeast Florida, about 15 miles west of West Palm Beach. 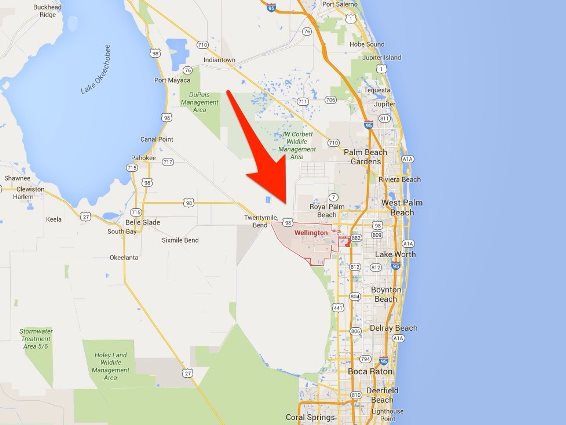 Without a doubt, horses rule in Wellington.

Many roads and neighborhoods are equestrian-themed.

Bill Gates owns several properties in the area, and in 2016 he reportedly completed a $38 million purchase of an entire Wellington street, totaling six properties and about 20 acres. His daughter Jennifer is a seasoned WEF competitor.

In a fitting continuation of the rivalry between Gates of Microsoft and the late Steve Jobs of Apple, Laurene Powell Jobs reportedly purchased a 3.5-acre ranch on Wellington's Quarter Horse Trail for $15 million in July 2016. Her daughter Eve is also an accomplished rider and has competed against Jennifer Gates.

Grand Prix Village, an exclusive, horse-focused development within walking distance of the show grounds, is famous for stables.